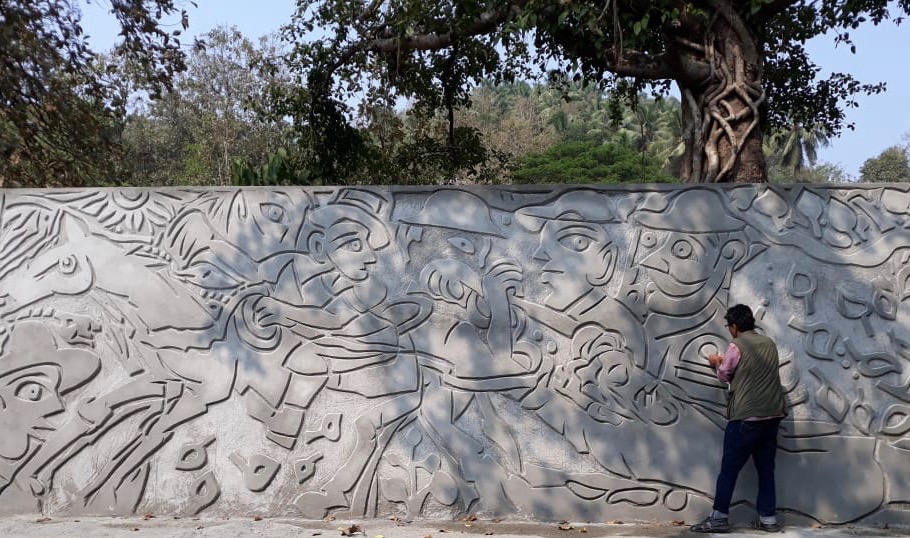 Suresh K. Nair, a professor of mural painting at Benaras Hindu University, is a native of Palakkad district. As a mural artist, whenever he sees a wall, he starts visualizing a monumental art project. Two years ago, he asked the leadership of the Government Higher Secondary School in Cherpulassery about making a monumental cement mural on the school’s boundary wall, but the school lacked resources for such a project. However, an alumni of the school, presently a successful lawyer practicing in West Asia, P.V. Shaheen came forward to offer his help and make the dream a reality.

The wall of the Government Higher Secondary School in Cherpulassery is running along a beautiful street shaded by ancient banyan trees. Its 7,000-sq-ft is divided into 25 panels depicting local history, culture and tradition, and it is framed as a story-telling scroll starting with a Moon and finishing with a Sun made of mirrors. The portraits, images and calligraphy were created with the help of 12 students of Suresh K. Nair from Benares Hindu University, local workers and painters. There are portraits of Mozhikunnath Brahmadattan Namboodiripad, an eminent figure of the 1921 Malabar rebellion; Netaji Subhash Chandra Bose, a political leader fighting for independent India; Gandhi talking to the people of Cherpulassery; P. T. Bhaskara Panicker, a great scientist and educator of Kerala; Kannattil Ramanezhuthachan, the well-loved clerk of the school, who planted the banyan trees, and many others. Images of local tradition include a figure of traditional shadow puppetry, the Tholppava Koothu; temple dancers during Teyyam and Thira; and also a stunning calligraphy of the Malayalam word “river” designed by Narayana Bhattathiri, a Malayalam calligrapher and designer visiting the site during the work.

The project was named Wall of Peace not only because by reminding people of history and tradition it promotes the beauty of diversity, tolerance and harmonious co-existence, but also because the word “peace” is written on the wall in 250 languages.